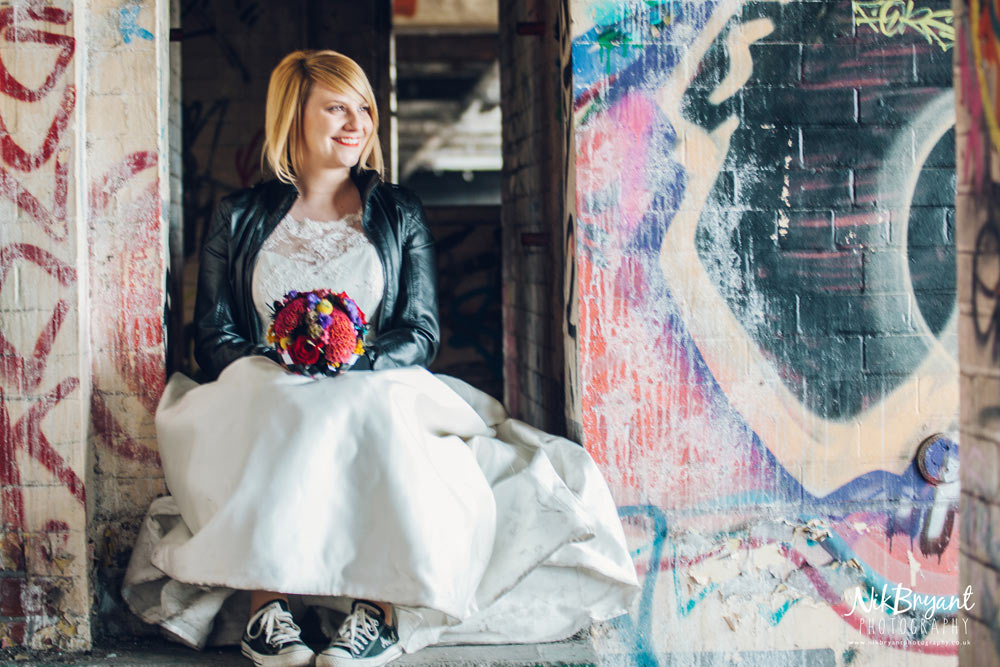 Recently I decided to do something a little different and something not alot of photographers do and that was to collaborate with another photographer. I had met Kate from Squid and Pearl Photography on an earlier shoot where she had decided to jump in front of the camera (Blog here!). Through out shooting with Kate obviously both being photographers we got chatting and decided to work together on a shoot.

With us both having different styles but wanting to do something with a bit of a twist I suggested we head to a location I have shot at before and love but would be a little different from your normal bridal shoot. Huncoat is an old abandoned powerstation covered in graffiti and it has been left to fall appart.

When my wife, Laura, heard what I was planning she immediately wanted to help out. We have explored huncoat together before and even before we got married Laura had suggested wanting to go back to have a shoot in her dress. Its not often my wife offers to stand in front of the camera for me but I think the fact it gave her opportunity to rock her frock again was too good to pass up and I have to admit it was pretty cool to be able to photograph my wife in her dress as she wouldnt let me take any pictures on our wedding day 😉

Alongside Kate and I we built up our little dream team of suppliers to help us out. Michael from Satin Pictures came down to capture some awesome behind the scenes footage and put together a little video which can be found at the bottom of the blog. Michael is an awesome guy and knows his way round a great wedding video and I cant wait to work with him again. Make up was provided by the lovely Kat Horrocks and flowers by the awesome Bliss Flower Art who again both come highly recomended.

I really hope you enjoy the pictures from the shoot!

← Wedding Photography // A Neil Redfern Workshop Engagement shoot // Andy and Rach // Stoke →
We use cookies on our website to give you the most relevant experience by remembering your preferences and repeat visits. By clicking “Accept All”, you consent to the use of ALL the cookies. However, you may visit "Cookie Settings" to provide a controlled consent.
Cookie SettingsAccept All
Manage consent