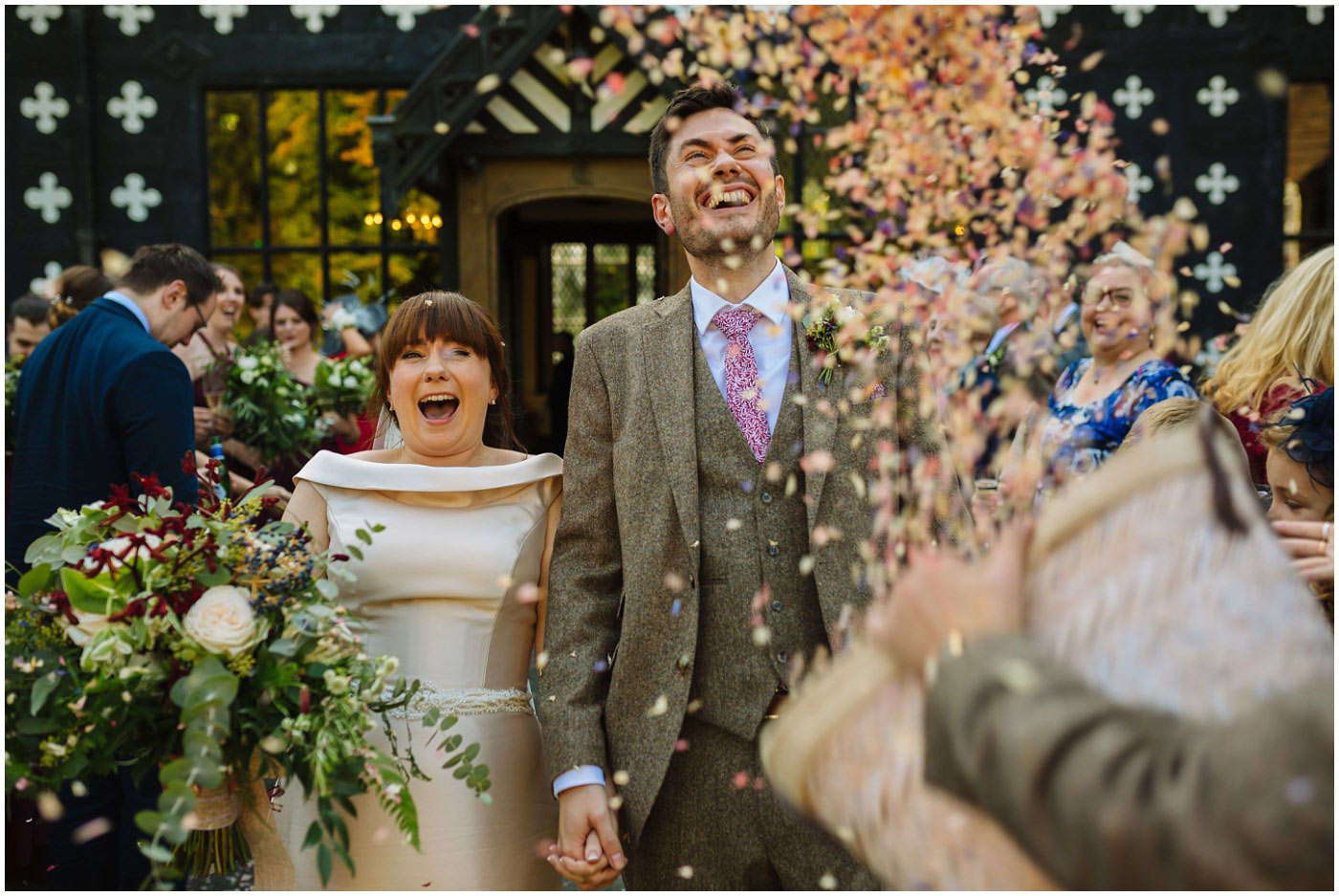 From a modern Tinder meet up to a wedding at one of the oldest venues in Lancashire, this is Chris and Emily’s Samlesbury Hall wedding.

Oh, but first, let me kick off with their top tip for a fantastic wedding day… “Hire Nik to do your wedding photos!”

Haha! Thanks guys, did I ever tell you you’re my favourite couple ever?!

Preston’s Samlesbury Hall is a Lancashire stately home packed full of history. Rumour has it there’s even a ghost or two that lives there! I kept my eyes peeled but didn’t spot any supernatural antics at Chris and Emily’s wedding though!

I love the story of how they chose Samlesbury as their wedding venue. It was one of the first places they visited after getting engaged but being a rather analytical pair they needed to know it was the right one for them. Cue them making a list of every wedding venue in the country, whittling it down to venues within an hour of Manchester (200…) and then made a shortlist of 40. From there they visited a few, made some meticulous notes on a spreadsheet and ended up at Samlesbury Hall. Back where they started!

I love that Chris and Emily kept their decor nice and simple, showing off the beautiful interiors of Samlesbury Hall. Kerry from Wild Flowers put together some very natural arrangements of foliage, herbs and seasonal flowers which were used as centrepieces for the tables, as well as using similar arrangements for the buttonholes and bouquets.

Like me these guys love their music. They put together a playlist for each part of the day and themed their tables around albums that had impacted on their life including Clockwork Radio, Elbow and Bruce Springsteen. Each table name also had a little story on the back, so guests could understand the album and why it was so important to them.

After their informal ceremony in the Whittaker Room everyone made the most of the glorious weather and spilled out (to the sounds of Morecombe and Wise singing Bring Me Sunshine) onto the grass for some lawn games. Chris, Emily and I decided to sneak away for a few portraits and headed out around Samlesbury’s grounds before rejoining everyone for some hilarious speeches and a first dance to Richard Hawley.

Chris, Emily, I loved your day! These are some of my favourites.

The History of Samlesbury

The first mention of Samlesbury Hall is in the days after the Norman Conquest of England in 1185. A small hall was built to house Cospatric de Samlesbury and his family. This is before Preston and Blackburn were even noted as towns.

The oldest part of the hall is the Great Hall first built in the 1325 by Gilbert de Southwith and remained in the Southworth family until the 17th Century. Each generation and owner added too and changed the property with the hall we recognise today being built by Thomas Southwith the dining room fireplace dates back to 1545. The family were tied up with the Catholic Church at the time that Queen Mary was in the throne and were staunch supporters of the Catholic cause. However, the family later swore allegiance to the Church of England conforming to the new Queen, Elizabeth I.

The Southworth family were then tied up in the Lancashire witch trials in 1612. With Sir John’s Great Granddaughter accused alongside two other local women of witchcraft. The case went to trial at Lancaster and the famous Samlesbury Witches were aquitted of their alleged crimes.

By 1687 the family were bankrupt and the Hall was sold on, being used as a small factory for local weavers. By 1834 the hall in the ownership of Col. T.R.G. Braddyll and he converted Samlesbury Hall into The Braddyll Arms. It’s position between Preston and Blackburn made it an ideal spot for a hostelry. Much of the original interior was pilfered by Col. Braddyll and installed in his own home! Sadly he rather overstretched himself with his endeavours and he also became bankrupt. The hall was then converted into a school in 1852 to educate local young ladies and small boys.

By 1862 the Industrial Revolution was is full swing and a local mill owner and philanthropist Joseph Harrison purchases Samlesbury Hall. He and his son embarked on a project of restoration and repairs to the hall which he made his home until his death in 1879. The hall then passed to various relations over the years until the final owner FitzRoy Lewis Montague Johnstone was killed at the Battle of the Marne in 1914. The house then fell into disrepair and a builder bought the property with the aim of demolishing it and building a housing estate. A local fundraising effort was made in the local area to buy and save the property took place. The Samlesbury Hall Trust took ownership in 1925 and have managed the property ever since.

The Grade I listed medieval manor house is open to the public. The house still retains its 14th Century roots, with it’s striking black and white exterior. The hall also includes a Chapel, initially built by the Southworth family to upgrade the property to a manor house. Inside the hall huge oak beams hold up the ceilings providing a cavernous space for entertaining. Stepping into the Great Hall feels like stepping back in time, you can almost feel the Southworth family waiting to join in the party. Huge stone fireplaces can be found in many of the rooms. On the walls paintings hang of the previous owners of the house. There is a

heraldic theme in the decor with crests and coats of arms found surrounding fireplaces and in the stained glass. Fireplaces are flagged by fine hearthstones. Dark wood is the feature of this building, shining floorboards can be found throughout the hall and an imposing staircase leads up to the second floor. Wood panelling and carving add to the medieval ambience of the space.

Samlesbury Hall has a number of outdoor spaces, a fine lawn bordered by seasonal planting and a glorious courtyard area. The Courtyard has fountain surrounded by fine topiary and provides a lovely outdoor setting for guest to enjoy. Flowers surround the door in hanging baskets and planters bringing a splash of colour to the monochrome building. The Hall is surrounded by mature trees, in the spring you will find and array of daffodils, the summer sees bedding plants and autumn reveals it beautiful colours in the trees surrounding the hall.

← Fairfield Social Club // Charley and Lee The Wellbeing Farm // Venue Spotlight →
We use cookies on our website to give you the most relevant experience by remembering your preferences and repeat visits. By clicking “Accept All”, you consent to the use of ALL the cookies. However, you may visit "Cookie Settings" to provide a controlled consent.
Cookie SettingsAccept All
Manage consent